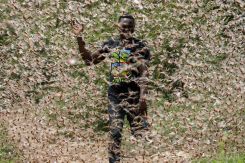 I’ve been talking about the ongoing locust plague in Africa/Middle East for a while now and found this somewhat current video on youtube. I’ve also included several older videos so you can see the scope of the problem.

Swarms of locusts cover the sky in Russia – YouTube

This will eventually cause some major food disrupttions around the globe.